Botswana is a dry country even though the Zambezi River, pours over Victoria Falls, Zimbabwe 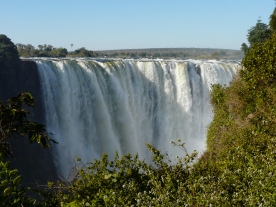 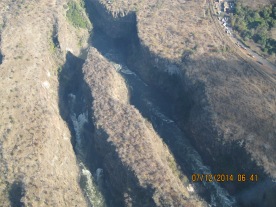 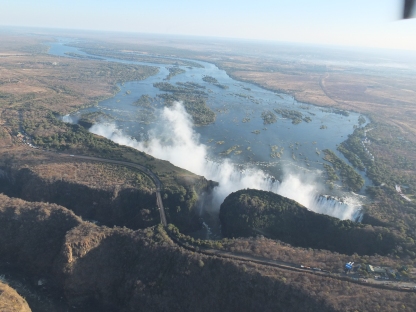 and drains  into the Okavango Delta  in Botswana. It becomes a vast swamp (like the Everglades in the USA) and surprisingly, does not drain into an ocean. The Delta stretches for miles and miles in the cool rainy season, farther than the horizon. Summer is so hot and dry that the water evaporates and the swamp shrinks to only one-tenth of its size. As the wet lands dry up, the former lakes become large puddles, resulting in a population of thirsty animals in a smaller area.

A nice place to wallow 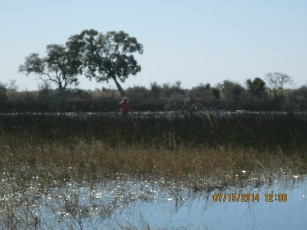 Pam has figured out how to Pole, but kept getting hung up in a Thorn tree

The Africans bend at the hips, I was told it takes less energy than squatting or bending. They did not seem to have any back problems.

Sunset in the Okavanga Delta 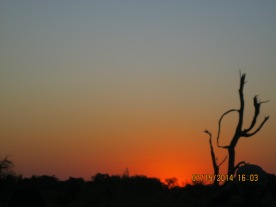 Sunset in the Okavanga Delta

Zebras in the distance 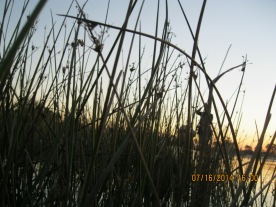 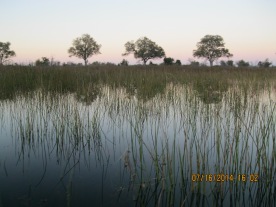 The water was about waist deep, shallower in some places, and deep enough for hippos to submerged themselves in others. 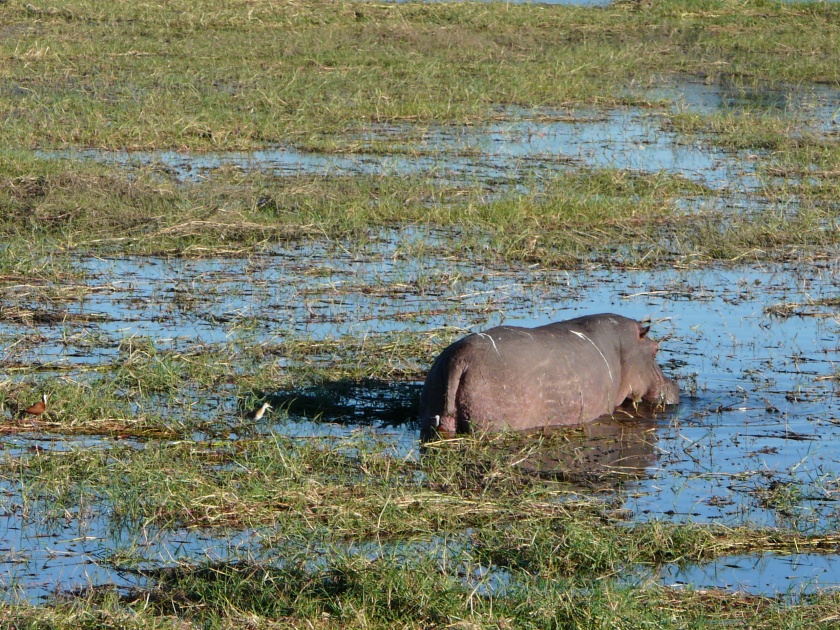 We were told that there were crocodiles in the water. They didn’t usually bother people, there are plenty of fish for them to eat, but they are opportunistic feeders– so don’t drag your hand in the water while in the canoe. 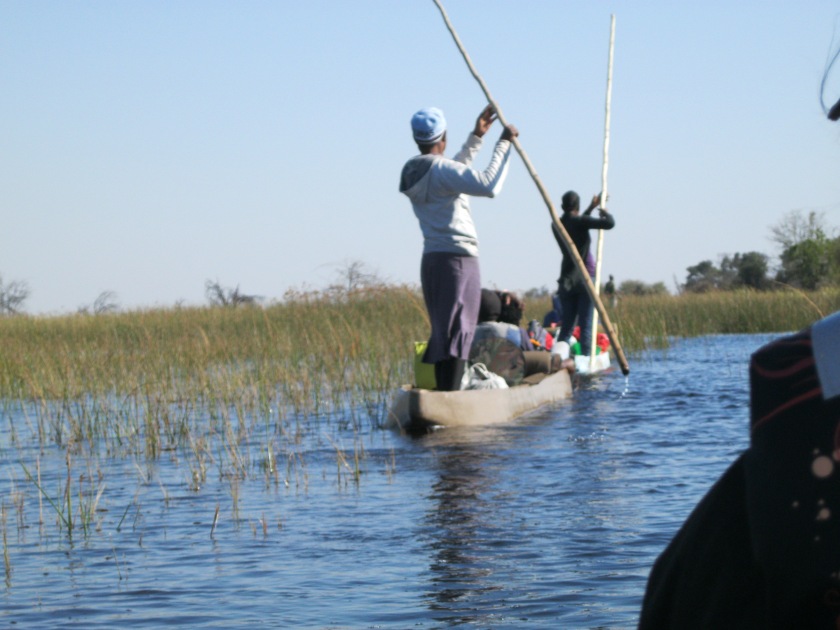 Each canoe held 2 passengers and one “poler”. Our guide told us the reason we only had 2 passengers was because, of course we could squeeze in more, but but by having only 2 passengers in the canoe, we provided more jobs for the villagers. The village was divided into 3 groups, A,B,C. Whoever wanted to work was able to.   Each time a tourist group arrived, the groups would rotate as to which group would “pole” us to an island and stay with us for 2 days.   It was interesting to meet the workers and to understand their lives a bit. Most of the women were shy- English is not their primary language and they were embarrassed that they were not fluent. 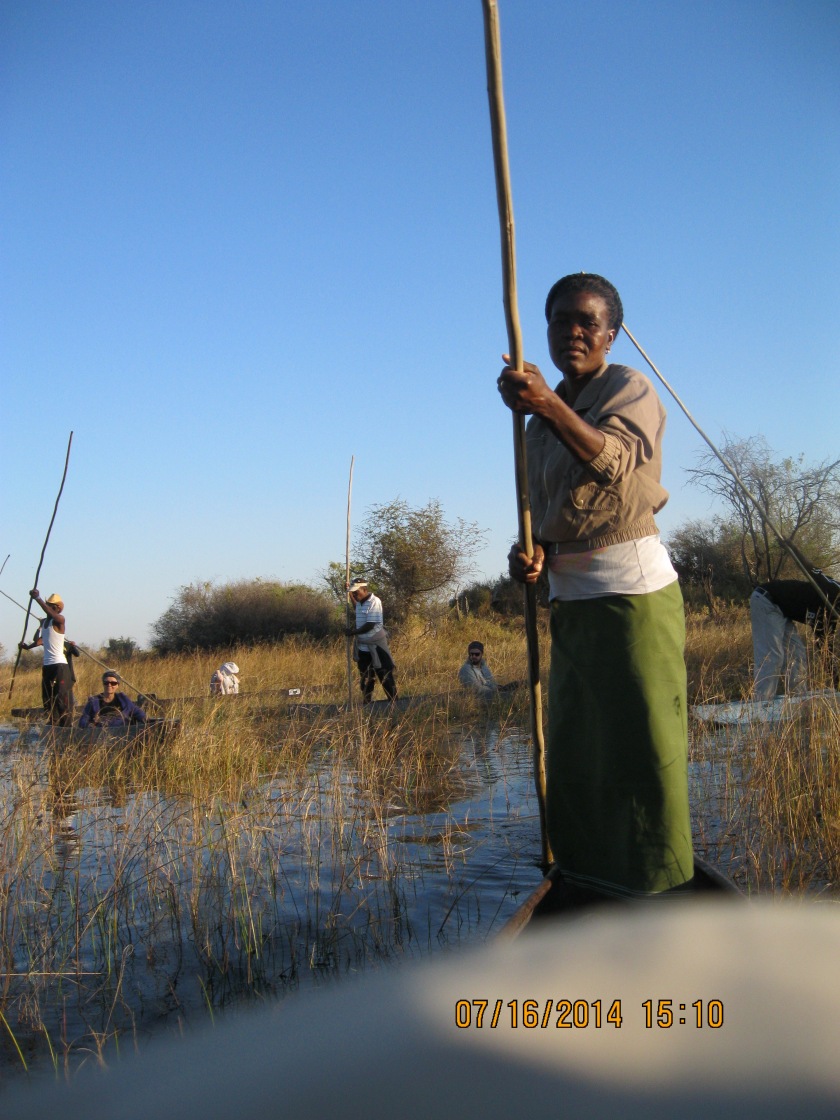 Lady who “poles”, pushing our Mokoro (hand dug canoe) through the Okovango Delta

I was surprised at how many people apologized for their limited grasp of English. After all, I was visiting their countries and certainly did not expect people to know my language.

Once we arrived at the island, we set up camp.

Our toilet for 2 days. The seat and frame were used for “guidance” so no one fell in the hole. It was not something I wanted to sit on. After all, about 20 people were using this hole.

My spacious accommodations for the next 9 days.

The women were in charge of cooking, and believed that men should not help . Men who wanted to cook were considered greedy, because they wanted to do their own work as well as the woman’s work. We Westerners were shocked, and our perspective was one of let whoever wants to help, help.

I was told that the men like women who are fat. It means they are prosperous. Most men were very thin, but I don’t know the signs to know if they were malnourished.

Each day we took several guided walks, and canoe rides. We even got to try poling ourselves.

Pam learning how to Pole. 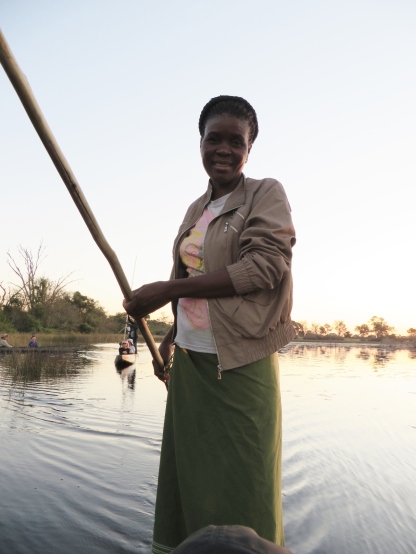 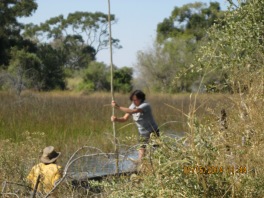 None of the polers need to worry about us taking their jobs. It was not hard to push forward, but it was difficult to steer. The front of my canoe was stuck in a thorny bush and I spent a  about 15 minutes trying to maneuver out of it.