I love this photo. It is an ordinary day for a Muslim who is not blowing things up.  Terrorists create terror. This is a girl who is smelling the tulips, just like everyone else. People told me it was not safe to travel, that people are out to get Americans, that ISIS wants to get me. Yes, there are dangerous parts of the world, and there are extremists everywhere. However, let us not forget an extremist is just that- it doesn’t matter which religion is followed.  I have heard a lot of remarks regarding “all” or “none” of a certain religion yet did not see a bomb anywhere, nor were there any other problems.

The Netherlands, also known as Holland, is a country that I would considering living in, if it wasn’t so far north and cold. The language seems like a cross of German and English. Although many of the words looked different, if I sounded out the letters I could often figure out what the words meant, like kaard meant card etc.

Here I am at the cheese museum.

END_OF_DOCUMENT_TOKEN_TO_BE_REPLACED

Sometimes people have asked me if I get lonely while traveling by myself. The answer is yes, but it is seldom. By traveling alone, I am forced to strike up conversations and meet people and I have some fond memories by doing so. Once was in Amsterdam.

I was waiting to be seated at a very busy restaurant – the oldest pancake house in Amsterdam. I was standing in line behind a woman named Ann and her daughter and son who were about 9 and 11 years old. The restaurant was crowded, not one seat was available.

After waiting about 10 minutes a woman lumbered down the narrow stairs of the second floor and declare loudly, “What a terrible experience, that is the worst food I have ever eaten in my life.” She wanted to be sure that everyone in line heard heard her, and I might have been inclined to believe her had she not used all of those phrases with those particular vocabulary words; terrible, worst food, ever eaten, in her life.

To me, terrible is a word used to describe a mudslide that wipes out a village. To me, the worst food ever eaten would be something like Balut . (wikipedia-A fertilized chicken or duck egg is buried in the ground for a week, after which the egg — containing a half-formed fowl — is soft-boiled. Balut is eaten out of the shell with a spoon; there is no need to worry about choking, as the bones and feathers are only partially formed.

credit to Marshall Astor from San Pedro, United States – Inside a Balut – Embryo and Yolk 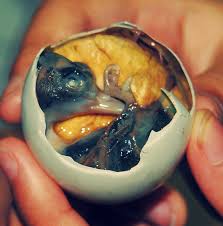 How can any pancake at all be the worst food ever eaten? It is a pancake. It may be overcooked or undercooked, but the worst food ever eaten? Obviously, she has never had any of my cooking. I have made plenty of things that didn’t come out right, and I am confident there is more than one that was much worse than a pancake, like the time the garlic bread caught on fire while baking in the oven – when I had first time guests, no less.

This unhappy woman was likely a disappointed person where nothing in her life would be satisfactory. If this was the worst food she ever had, my cooking would probably be the death of her.

But, kids don’t know that. When they hear someone say it is the worst food they have ever had, kids may believe it. So, I started to speaking to this family, partially to show solidarity with others who had picked this restaurant out of a tourist guidebook, not knowing what to expect, and because I heard them speak American English to each other.

This family had been standing in line for over 20 minutes, it was raining outside, the kids were hungry and getting grumpy, and were bored just standing around. The mom and kids had spent the last few days cooped up together and the father who was supposed to have joined them, was delayed by several days at work. The kids were still getting along ok, but each wanted to do different things. They were bored with each other, and it seemed to me that they all were getting tired of each other’s company.

When one table opened up for four people, the mother asked if I would like to join the family for lunch. I happily said yes. Again, by traveling alone, opportunities arise that would not have happened if I had been with others.

The mom was a responsible adult and recommended to her kids that they get savory pancakes, while I got to be the exotic friend who was not only traveling around the world on my own, but ordered pancakes with ice cream and whipped cream on top – for lunch.

Of course, we shared the pancakes, and I must admit that the savory pancakes they ordered were so good, we actually finished eating them first.

It was fun to spend lunch with a family and get to be the exotic friend who added excitemeent due to my latest adventure. I was able to talk about hiking on a glacier, and riding Icelandic horses and share photos with the kids. And my adventure became their adventure.

Well, I went to the Red Light District and then went to the Prostitution Information Center. What an education!

When I think of the The Netherlands, or Holland, I think of:

I have a friend who lives in Amsterdam and I will be visiting him.  I plan on seeing the Anne Frank house while visiting. I want to see the place where a family and friends lived for years so secretly and had to be sooo quiet all the time. I cannot imagine myself having to be holed up with the same people for several years, and having to be quiet all the time. Literally, life or death depended on this. And to be a teenager, growing up in these circumstances is unimaginable to me.  I have also seen pictures of the tulips in bloom, and I am betting that photos do not do it justice.