2004, the day after Christmas, there was a tsunami in the Indian Ocean. Perhaps you remember it like I do, the videos of waves crashing against the beach and rolling towards the buildings, explosion of water and debris as the wave hit trees lining the beach like a line of dominoes and shoving a wall of cars, boats, building and remnants of a holiday on the beach. Everything and everyone who were in its’ path were smashed into buildings, crushed against walls and sliced open by the objects in the water. Then the wave receded, sucking the living and the already dead, back out to the sea. The debris was pulled out with them. Then the next wave slammed ashore.

In 2015, I talked to Thai people who informed me they had never heard the word tsunami or the words “Tidal Wave” before this natural disaster. I was shocked. How could this be? As an American kid, we would shout “Tidal Waaaaaaaave” as we wrapped our arms around our legs and curled into a cannonball jumping into a pool  to create a huge splash. I am a child born in the 60’s and was aware of Tidal Waves from cartoons. The Tidal Wave in the Indian Ocean is the only one I know of in my lifetime. 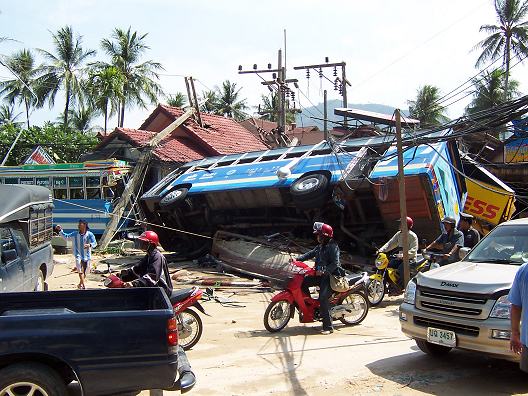 I spoke to some people who graciously shared their stories about that time. Most Thais are modest. People are covered from shoulder to knees, typically. It would be unusual to see a man without a shirt. They wear swimming clothes when swimming in public.

It was morning and the family was opening their clothing store  less than 5 miles from the beach, when a small pickup truck roared passed the shop, loaded with dozens of half-naked dressed men riding on it. It looked as though 50 men were hanging on any way they could, many had no shirts on, some had no clothes except for underwear and many had no shoes.

Then another small truck, streaked by as well. It was followed by another. And another. Each truck was carrying people, some standing, some hanging off the sides, the rest hanging onto anything and anyone. It was a mass of humanity escaping… what? These were local fishermen who lived along the coast, hanging on to the trucks that were heading into the nearby steep hills.

The family ran to the television to understand what was happening. This is the first time they heard of “The Big Wave”. Within minutes, life changed for more than ¼ million people in the world.

Life Law: It can always get worse. 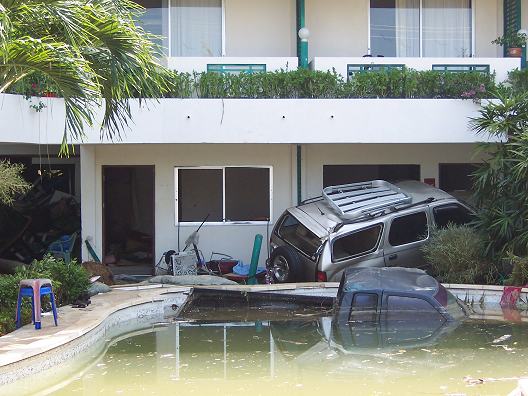 Often, tsunamis have multiple waves. After the first wave individuals ran to help the victims and were snatched by a later wave and washed away.

It was hard to believe that such a peaceful place could morph into a monster.

This is one of the beaches where the tsunami hit. We stopped here  and swam at sunset. This was only the 2nd time in 11 years that the family swam here.

Along the shoreline where the tsunami hit

As the ocean retracted her claws, she left behind the ruins of civilization; cars, boats, demolished buildings and people. Human bodies were strewn everywhere. There were broken bodies stranded and hanging in tree branches. Many bodies were naked, the force of the wave stripping people of clothes. Many people are still missing.

Another boat that was washed ashore from the tsunami. A memorial was built around it.

A Navy ship that was washed ashore by the tsunami. It stands where it was pushed, they don’t have the equipment to move it back to the sea. The wave did not discriminate. A grandson of the king was killed while jet-skiing.

The first bodies recovered were taken to the mortuary until there was no more room. Yet, bodies continued to be brought in. Soon, bodies were sent to the grounds of a nearby temple. The temple grounds filled until there was no more room for the corpses. Yet, more arrived. Dry ice was brought in, and it looked like temple was smoking. Next, refrigerated truck containers were brought in and parked on the temple grounds to store the bodies until they could be identified. The temple was next to my friend’s clothing shop.

I can’t even imagine all of these bodies piled up in a makeshift parking lot of corpses. These were decaying bodies that had been immersed in salt water, bruised and damaged, and then bloated and burst open. Within 24 hours, the corpses swelled 3x their size. Not all victims drowned. Many were crushed, and sliced by debris in the water. It was a humid 89 degrees Fahrenheit day, and the corpses were decomposing. 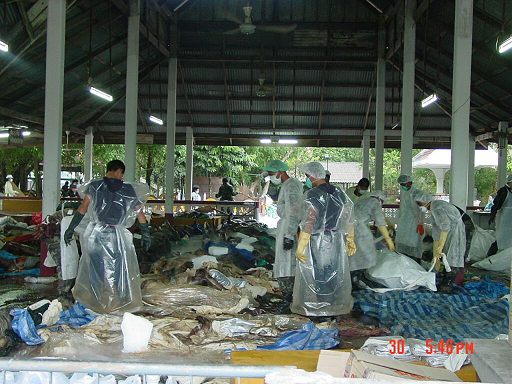 There was no way to get away from the gruesome odor. Every person I spoke to talked about the smell. One woman shuddered as she recalled it. Every person said it was an odor they would never forget.

My friend was 13 years old and remembers layering 3 masks over her mouth and nose, but it did not lessen the stink of death. She complained to her mother about the how bad it smelled, and then the smell intensified. Her mother made her go into the temple and to atone for such insensitive comments that had upset the ghosts of these souls that did not yet know they were dead.

Warning – this next part is even more awful. Brace yourself.

A refrigerated truck was parked in the temple grounds which was next door to my friend. He remembers looking at the truck and seeing a black cloud at the bottom right corner. When he looked closer he slowly realized it was flies. There was liquid leaking out of the corner where the door met the side of the truck, and flies and were entering the trailer through the same corner. So many corpses. And then the animals were attracted. There were rats and mice and the animals who eat them. There were stray dogs licking the liquid that was dripping out of the trucks.

The grotesque bodies were bruised and discolored from the wave and smashing into things and swollen from the salt water and the heat, so it was difficult to recognize and identify them. My friend remembers seeing a person in a coffin, but he was so swollen that ½ of one leg would not fit into coffin. The bodies were found naked, either their clothes had been torn off by the wave, or the clothing was ripped apart as the bodies swelled. Families bought clothes to bury them in, and when even the biggest size wouldn’t fit, they draped the clothing over the bodies for burial, giving them dignity in death.

Family and friends came with a mixture of hope and dread looking for their missing loved ones. The entire wall leading to the entrance of the temple was plastered with photos of the missing. 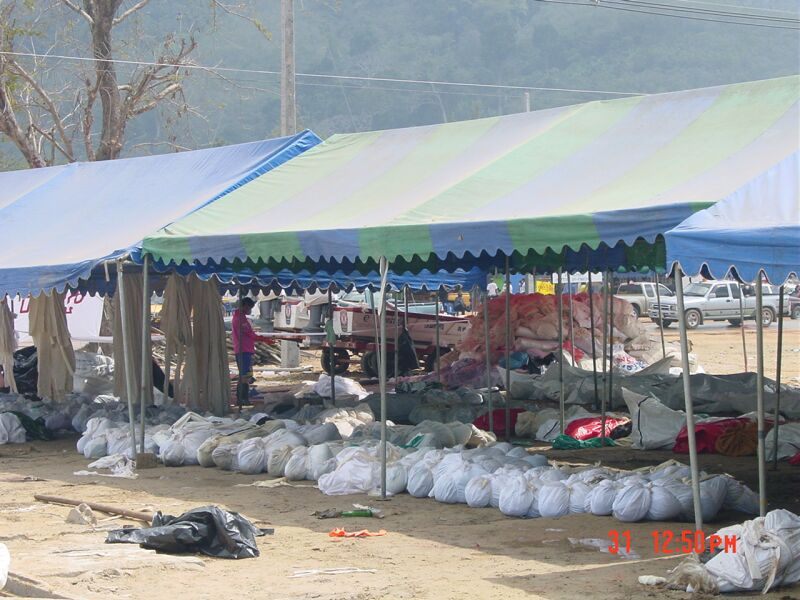 10 years later, there are still several hundred unidentified bodies. It is believed that many are Burmese immigrants who had no papers. Their families back home do not know what became of the people who left seeking a better life.

Many people in the Thai culture believe that the wave happened so suddenly that people did not know they were dead so their spirits  wandered around. My friend’s father said he was afraid to close his eyes at night. Her family did not swim in the sea, they were afraid of dead bodies. They would not buy fish from this area after learning of a fishmonger who discovered a human finger with a ring on it in a fish’s belly. They drove an hour to the other coast to buy fish.

The mother told my friend that if another tsunami comes along, it would be better to let the wave take you than to be one of the survivors left behind. 11 years later, she stands by that statement.

Miw’s mom and dad. on a beach that was hit by the tsunami.